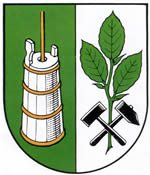 The right half of the arms shows a churn, as the region was historically called Butteramt (butter-area), as the local farmers were well known for their butter on the markets in Hannover and Wunstorf. The miner's tools indicate the former mining in the area. The beech leaves are canting; Bokeloh means Buchenwald (beech-forest).