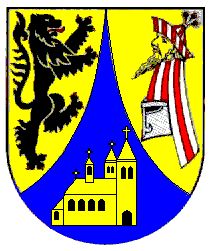 The base shows a church. The oldest seals of the city showed a church as the main symbol, with the two other elements as small figures above the church. The church has been described as a symbol of the diocese of Merseburg, to which the city belonged.

Until the middle of the 19th century the city used arms, based on the oldest seals. These arms were still shown by Hupp in the 1920s (see images below). In 1897 the present arms were officially granted.

The main colours, gold and blue, are derived from the Wettin family, Counts of Meissen. During the DDR times the arms were iften shown with a black lower field and only one main tower. In the 1990s the colours were restored.