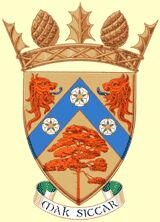 The arms are granted on ?

The Lions' Heads are a symbol for the centuries-old connection of Braemar with the Royal families, first of Scotland, and latterly of the United Kingdom. The chevron symbolises the mountains of Braemar, the most mountainous parish in Great Britain. The colour is taken from the flag of Scotland as well as a symbol for the River Dee, the fastest flowing river in Great Britain.
The three Jacobite Roses symbolise the Jacobite connection and the 1715 Uprising, which started in Braemar.
The pine tree symbolises the Great Forest of Caledon, significant parts of which still survive in the Braemar area.

The motto "Mak Siccar" (make sure, or make certain) was finally chosen by the Lord Lyon, King of Arms, from a short list of suggestions collected in boxes in the village over a number of months. It stems from the days of Robert the Bruce in his fight for Scottish independence.