From Heraldry of the World
Your site history : Breitenau am Hochlantsch
Jump to navigation Jump to search 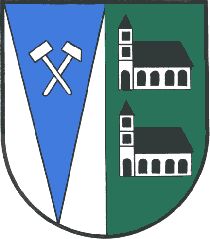 Contrary to its name, the municipality of Breitenau is situated in a very narrow valley (Breit=broad). This is represented, as well as the mining industry, in the dexter half of the shield.

The sinister half shows the old parish churches of St. Jakob and St. Erhard. Breitenau is a rural community; in the Middle Ages, parishes in the country used to be quite large. But here, there are two beautiful parish churches from medieval times, which is a bit of an exception. So they were placed on the shield as well.