From Heraldry of the World
Your site history : Brentford and Chiswick
Jump to navigation Jump to search 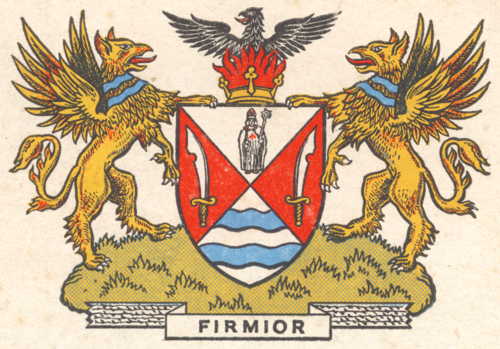 Arms : Per saltire Argent and Gules in chief a representation of St. Nicholas proper in base two Bars wavy Azure and in fesse as many Seaxes the cutting edges inwards proper Pomels and Hilts Or.
Crest : Issuant out of a Saxon Crown Or a Phoenix Sable in Flames proper.
Supporters : On either side a Griffin Or gorged with a Collar gemel wavy Azure.
Motto: 'FIRMIOR' - Stronger

The arms were officially granted on September 1, 1932.

The arms incorporate the emblems which appeared on the seal of the former UDC, which displayed the figures of St. Nicholas in reference to the dedication of the parish church, together with three seaxes from the arms of the County Council. The blue waves, like those on the supporters, represent the River Brent and the Borough's situation beside the River Thames.

The phoenix represents the new Borough rising from the ashes of the old Urban District.

The griffins appear to have no historical significance.