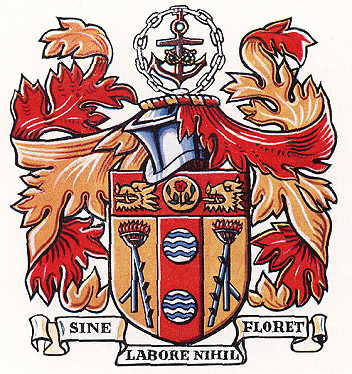 Arms : Or on a Pale Gules between two Beacons Sable fired proper two Fountains on a Chief also Gules between two Boar's Heads couped a Roundel Or charged with a Rose Gules barbed seeded stalked and leaved proper.
Crest : On a Wreath of the Colours within and pendent from a Circle of Chain an Anchor Sable the stock enfiled by a Stafford Knot Gold. .
Motto: 'SINE LABORE NIHIL FLORET' - Without labour nothing flourishes

The boar's heads and heraldic fountains refer to the ancient Manor of King's Swineford ( Kingswinford ) and the briar rose plays on the name of the Urban District. The beacons refer to the town's pricipal industries - glass, fireclay, iron and steel.

The emblems in the crest refer to the manufacture of those items and the knot refers to the County Staffordshire.