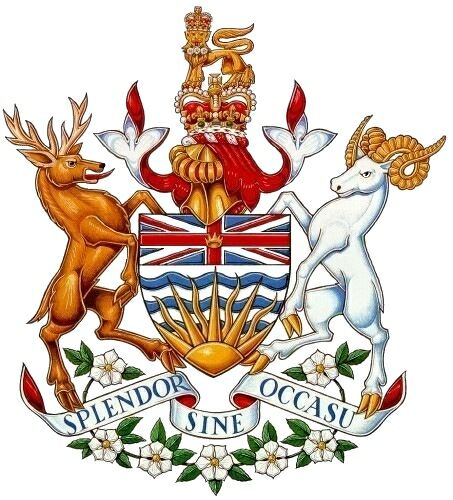 Arms: Argent three bars wavy Azure issuant from the base over all a demi sun in splendour Or a chief of the Royal Union Flag charged in the centre with an antique crown Or
Crest: The Royal Crest of the United Kingdom of Her Late Majesty Queen Victoria [Upon a Royal Crown proper a lion statant guardant Or royally crowned proper] differenced for Her Majesty and Her Sucessors reigning in right of British Columbia with the Lion thereof garlanded about the neck with Pacific Dogwood (Cornus nuttalli) flowers with leaves all Proper
Supporters: On the dexter side a Wapiti stag (Cervus canadensis) proper and on the sinister side a Bighorn Sheep ram (Ovis canadensis) Argent armed and unguled Or, both above Pacific Dogwood flowers slipped and leaved proper
Motto: SPLENDOUR SINE OCCASU

The chief at the top of the shield is a Royal Union Flag (commonly known as Union Jack) with an antique gold crown in its centre, symbolizing the province's origin as a British colony. Below the chief, on a ground of blue and silver wavy bars representing the Pacific Ocean, a gold half-sun signifies British Columbia's location as the most westerly province of Canada.

Below the shield a scroll is inscribed with a motto meaning "Splendor without diminishment."

The oldest colony in the current province was the colony of Vancouver Island, established in 1849. In the same year the seal of the new colony was made, which was based on the design of other colonial seals. The seal showed a shield with a beaver, pine tree, trident and cadeceus all under the Royal Arms.

The cadeceus refers to trade, the trident to shipping, the pine to forestry and the beaver to the arms of the Hudson's Bay Company, which was responsible for the administration of the new colony.

The Colony of British Columbia was established in 1858 and in 1864 the Vancouver Island colony was merged with British Columbia. The new colony used a simple seal with the image of Queen Victoria on a throne. This seal was used most of the 19th century.

A new seal was ordered by the now Province of British Columbia on September 16, 1896. The new seal showed a shield with the Union Jack and in chief a sun. It also already showed the two supporters, motto and crest as in the current arms. It was designed by Reverend Arthur John Beanlands, Rector and Canon Residentiary of Christchurch Cathedral in Victoria.

These arms were never officially granted. Only in 1904 the provincial government started the procedure of a request to the College of Arms to obtain the arms as use don the seal. In 1905 the College of Arms proposed the old design, but with the sun and Union Jack reversed. The reason was that the Union Jack should be in the most important part of the shield and not in the 'inferior' part of the shield.
Furthermore the College added a crown in the center of the flag. This proposal was approved and finally granted in 1906.

It also meant that a new seal had to be made, but it took until 1911 before the new seal was finally ready.

In the meantime, however the government had already used the design from the seal as arms proper, as can be seen in the window below in the legislative assembly of the province. It was also used on stationery.