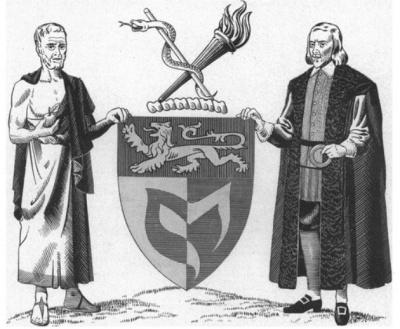 Arms : Per pale Or and azure, a maunch counterchanged; on a chief of the first a lion passant also azure.
Crest: On a wreath of the colours, In front of two torches in saltire azure enflamed proper, a rod of Aesculapius Or.
Supporters: On the dexter side a figure representing Hippocrates holding in his exterior hand a pomegranate proper; and on the sinister side a figure representing William Harvey, physician, also proper, holding in his exterior hand an annulet per fesse gules and azure.
Motto: With head and heart and hand.

The arms show a maunche, which is a representation of a mediaeval lady's sleeve, with the long extension at the wrist often used as a pocket. The maunche has been used on the coat of arms of the Hastings family since Plantagenet times. Sir Charles Hastings was the founder of the British Medical Association and the maunche was used on his arms.

The chief shows the Royal Lion differenced by the position of its head, as no one can use the Royal Lion, which is Her Majesty's personal property; but it indicates heraldically that the Association is British, and covered the Empire, Commonwealth, and Dependencies; it also emphasizes the royal connection, the Queen being the patron of the BMA.

The crest is made up of the rod and serpent of healing in gold and crossed by the torch of learning in blue.

Supporting the shield on the right is the figure of Hippocrates, the founder of medicine and of medical ethics, holding in his right hand the apple of health. The supporter on the left is the figure of Harvey, the founder of modern British medicine, holding in his left hand a circle coloured red and blue, indicating his discovery of the circulation.

Beneath the whole is the motto "Salus populi suprema lex".