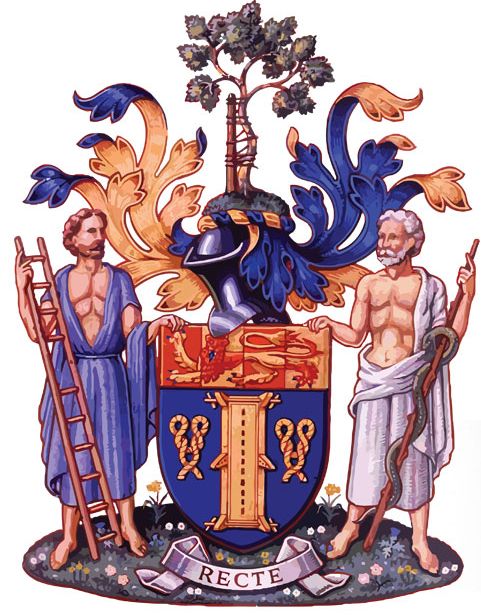 Arms : Azure, a scamnum between two cords nowed Or; on a chiefpaly of four gules and gold a lion passant guardant counterchanged.
Crest: On a wreath of the colours, On a mount vert a young plane tree in leaf with a crooked stem bound with cords to a straight post on the dexter all proper.
Supporters: On the dexter side a representation of Hippo­crates, habited azure, supporting with his exterior hand a ladder from which a rung has been removed; and on the sinister side a representation of Aesculapius, habited argent, supporting with his exterior hand his staff, all proper.

The shield shows an ancient traction table called a scamnum, complete with ropes for attaching the patient, said to have been used by Hippocrates, and obsolete for several centuries. It has no relevance to contemporary orthopaedic practice.

The red and yellow of the lion are used alternatively (counterchanged), a form often associated with medicine, probably because of the ancient arms of St Bartholomew's Hospital. The shield of the BMA, for example, is counterchanged in blue and yellow, the livery of the Apothecaries, and also has a lion on its chief. In passing, it is worth noting that the arms of the BMA are said to show the sleeve of a physician’s gown. A happy coincidence, then, that the family arms of the founder of the BMA, Sir Charles Hastings, bore exactly the same device.

The supporters are Hippocrates and Aesculapius. Hippocrates carries a ladder, used as recently as the Middle Ages to reduce dislocated shoulders. A rung has been removed to avoid breaking the patient’s neck. Again, no relevance to modern orthopaedics.

The supporters and shield stand on a mound with the rose, thistle and daffodill all miraculously in bloom at once. The motto is “Recte” which, "…is to be translated not only as straightly but as uprightly – befitting, proper and good”, all qualities consistent with orthopaedic surgery and Good Medical Practice.