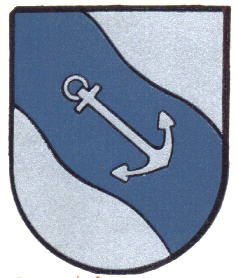 The arms are based on the arms of the Lords of Brochterbeck, whose arms are known from the 14th century. The family became extinct in 1400. The arms showed an anchor, but colours are not known. The wavy bend was added as a canting symbol (Bach=stream) for the village. The blue colour was chosen, as it was the main colour of the County Lingen, to which the village belonged.