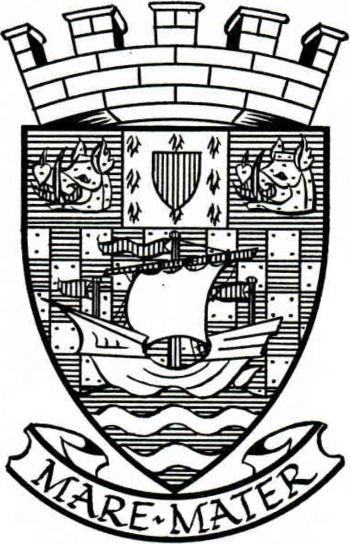 Chequy Or and Azure, upon the sea in base undy and of the Second and Argent, a lymphad, sail set of the Last, rigged and pennon Gules; on a chief of the Second between two boars' heads couped of the First, armed Proper and langued of the Fourth, a pale Ermine charged with an escutcheon also of the Fourth.

Below the Shield which is ensigned of a coronet appropriate to a Burgh is placed in an Escrol this Motto "Mare Mater".

The arms show a boat, coloured silver to denote the importance of the fishing industry to the Burgh. The gold and blue chequy comes from the arms of Gordon of Cluny, recalling the connection with that family and that it was John Gordon of Cluny who conceived and built the present harbour in the 1870's.

The same colours are repeated in the chief, where they and the boars' heads recall Gordon of Buckie in the Enzie, and the red shield on the ermine pale, Hay of the Rannes, both prominent local families.

The Latin motto means "The Sea our Mother".

The arms are those of the burgh with a different crown.