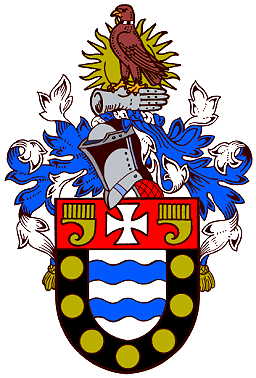 Arms : Argent two Bars wavy Azure within a Bordure Sable bezantée on a Chief Gules a Cross formy of the field between two Clarions Or.
Crest : On a Wreath of the Colours in front of a Sun in Splendour Or and upon a sinister Hand couped at the wrist and gauntletted a Falcon belled proper collared compony Argent and Sable.

The arms were officially granted on September 11, 1947.

The border derives from the arms of the Duchy and County of Cornwall and the two blue waves denote the town's coastal situation, and also refer to the probable derivation of Bude from a British river name. The silver background alludes to the family of Blanchminster, and the clarions are from the arms of the Grenville family. The cross formy is taken from the shield of Sir John Berkeley, who was created Baron Berkeley of Stratton for his part in the battle of Stamford Hill in 1643.

The gauntlet and falcon are the crest of the Acland family, who in 1939 presented their cliff lands to the public, its collar is derived from their arms. The sun stands for the District's reputation as a health and holiday resort.

Literature: Image and information from here