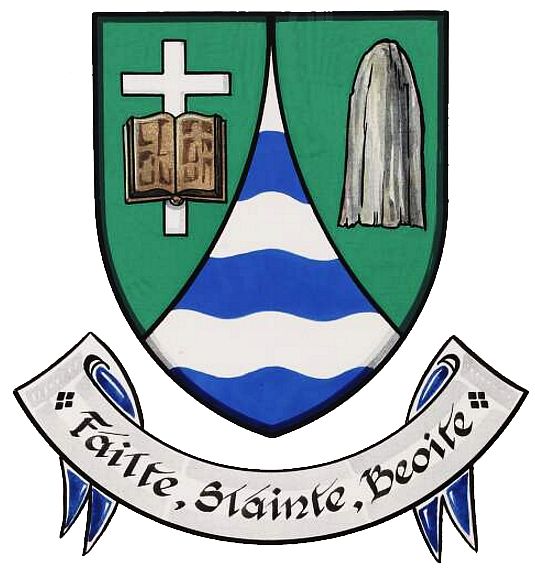 Per pile arched reversed vert and barry wavy of six argent and azure, in the dexter a Latin cross of the second charged with an open book or and in the sinister an ancient Irish pillar stone proper and with the Motto: Fáilte, sláinte, beoite.

The arms were granted to Bundoran Urban District Council on 21 June, 1983.

The white and blue wavy lines stand for the name and location of Bundoran. Its name comes from the Irish "Bun Dobhráin," which means "Foot of the Little Water” as it sits on the River Bradoge, overlooking the Atlantic Ocean. The two green slopes refer to the surrounding mountains, as well as the fact that over a hundred years ago Bundoran was two separate villages on either side of the river. The book and the cross symbolise the Annals of the Four Masters, a 17th century chronicle of medieval Irish history, compiled just outside of Bundoran at Drowse. The stone pillar is a "mass rock" at Magheracar in Bundoran.