From Heraldry of the World
Your site history : Burdekin
Jump to navigation Jump to search 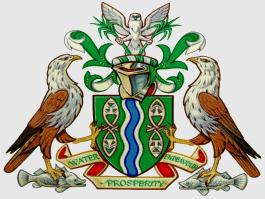 The green shield indicates that this shire is an agricultural district, while the blue ribbon represents both the considerable underground water supply, and the Burdekin River, with the white sands of both river and beaches depicted by the border. The twin masks of comedy and tragedy allude to the importance of the Arts in the twin towns of Ayr and Home Hill. The white owl symbolises education and the canes refer to the importance of the sugar industry.

The supporters are Brahminy Kites, commonly called Sea Eagles, and the Barramundi is a popular local game fish.

The motto means that by using the water from the aquifer, by great endeavour, the people can and do achieve prosperity.