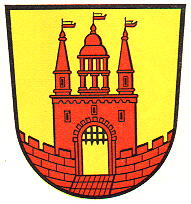 The present arms were granted in 1939.

The arms are based on a relief on the city hall dating from 1561. The oldest seal of the city dates from the 14th century and shows a tower. Later seals showed the tower behind city walls. All seals and arms of the city showed the castle, first with the single tower, later with the three towers as in the arms. The style of the castle varied according to the style of the times. The colours were not determined until 1939. The present colours are taken from the arms of the Lords of Steinfurt, who became extinct in 1421.

Hupp showed the arms in the 1920s in two different colour versions in the Coffee Hag albums, see below.