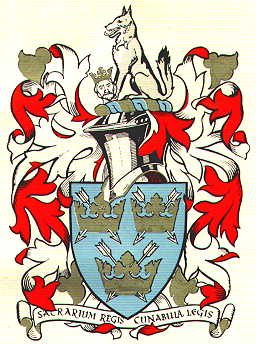 Arms : Azure three open Crowns Or each transfixed with two Arrows in saltire [points downward] Argent.
Crest : On a Wreath of the Colours a Wolf sejant proper holding a King's Head couped at the neck of the last crowned Or; Mantled Gules doubled Argent.
Motto: 'SACRARIUM REGIS CUNABULA LEGIS'

The arms were officially granted November 29, 1606.

The arms are based on those assigned by the medieval heralds to the Kingdom of East Anglia, whose last king was St. Edmund.

The crest refers to the story of his martyrdom. In 870 King Edmund was overthrown and captured by the Danes in battle at Hoxne. Choosing martyrdom rather than renounce his Christian faith, he was shot to death by arrows and later beheaded. When his followers discovered the body they we unable to find the head until they heard the King's voice crying out, directing them to a spot where the head was being guarded by a wolf.

The motto translates as Shrine of the King, cradle of the law. The first half refers to King St. Edmund. The second half of the motto refers to the fact that it was at Bury St. Edmunds, that Archbishop Stephen Langton and the Barons opposed to King John met in November, 1214, and pledged themselves to the undertaking which led to Magna Carta.