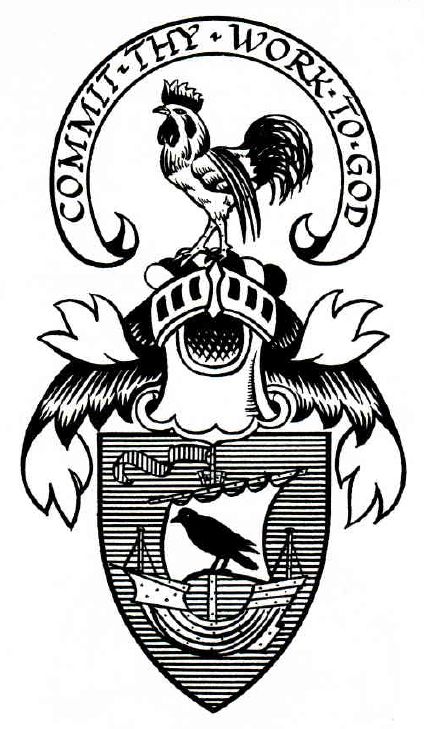 Azune, a galley Or, the sail thereof Argent, charged with a raven Sable.

Above the Shield is placed a Helmet of befitting degree with a Mantling Azure doubled Or, and on a Wreath of their Liveries is set for Crest a cock Proper, armed and beaked Or, and in an Escrol over the same this Motto "Commit thy Work to God".

The arms show a Viking longship, as the medieval history of the region is very much influenced by the Vikings. In the 11th century the region became part of the jarldom of Orkney, one of the most influential parts of the Norwegian Kingdom. The region remained under Viking influence for more than 300 years. The black raven was an important badge for the Vikings.

The crest of a cock and the motto are those of the Sinclair Earls of Caithness (see image below); these were used on the seal adopted by the County Council in 1890.

Additions : 1975 the Burghs of Thurso, Wick, and the Central, Eastern, Northern, Southern and Western districts.
Incorporated into : 1996 Highland Area Council 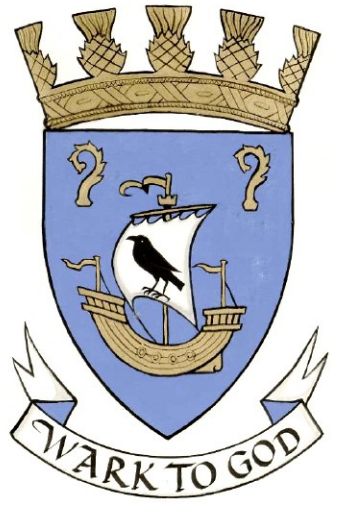 Azure, a galley Or, the sail thereof Argent charged with a raven Sable, and in chief two crosier heads of the Second.

Above the Shield is placed a coronet appropriate to a statutory District, videlicet:-a circlet richly chased, from which are issuant eight thistle-heads (three and two halves visible) Or; and in an Escrol under the Shield this Motto "Wark to God".

The ship is taken from the old arms of Caithness County, as the district covers the same area as the old county.
The two crosiers represent the patron saints of the two Burghs in the council; St. Fergus for Wick and St. Peter for Thurso.