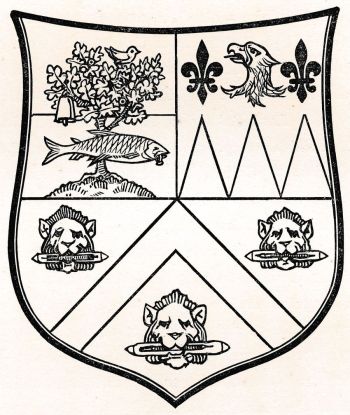 Party per fess, and in chief party per pale, three coats. First, party per fess argent and gules, on a mound in base vert, an oak-tree proper, the stem at the base thereof surmounted of a salmon naiant contourne also proper, with a signet-ring in its mouth or; on the top of the tree to sinister a redbreast contourne, and pendent from the tree in the dexter fess point an ancient hand-bell both also proper. Second, argent, three piles issuing from the base azure, in chief an eagle's head erased proper, between two fleurs-de-lis sable. Third (in base), argent, a chevron between three leopards' faces gules, holding in their mouths spules or shuttles of yarn or.

Crest: a hive surrounded by bees volant
Motto: BY INDUSTRY WE PROSPER

The area was a Burgh of Barony from 1817 to 1846, when it was annexed by the City of Glasgow. The arms above are based on the Burgh seal and the colours are estimations.

The second quarter consists of the arms of Struthers of Calderbank. Mr Robert Struthers was chosen first magistrate of the burgh when it was erected in 1817. The lower half of the shield is clearly intended to indicate the trade of weavers, the staple industry of the burgh, and are derived from the arms of the Websters of Edinburgh (argent, on a chevron, azure, 'twixt three leopards' heads of the same, holding in their mouths a spool or shuttle of yarn, or, as many roses, gules).