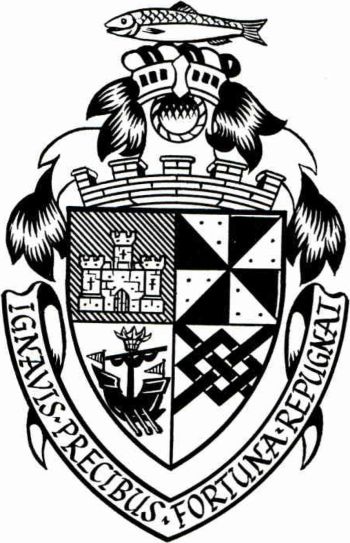 Quarterly: 1st, Vert, a castle triple-towered Or, masoned windows and port Gules; 2nd, gyronny of eight Or and Sable; srd, Argent, a lymphad Sable, sail furled and oars in action, flagged Gules, at the masthead a beacon in flames Proper; 4th, Argent, a fret Sable.

Above the Shield is placed a coronet suitable to a Royal Burgh, thereon a Helmet befitting their degree, with a Mantling Vert doubled Or, and on a Wreath of their Liveries is set for Crest a herring naiant Proper, and in an Escrol below the Shield this Motto "Ignavis Precibus Fortuna Repugnat".

Campbeltown was created a Burgh of Barony in 1667 in favour of Archibald, 9th Earl of Argyll, and was raised to a Royal Burgh by King William III in 1700.

1735 and is buried in Campbeltown.

The crest of a herring refers to the local fishing industry and also commemorates the time of the Herring Bounty when hundreds of herring "busses" used to assemble at Campbeltown to receive the Bounty.

The Latin motto has been freely translated as "Fortune helps those who help themselves".