From Heraldry of the World
Your site history : Canadian Heraldic Authority
Jump to navigation Jump to search 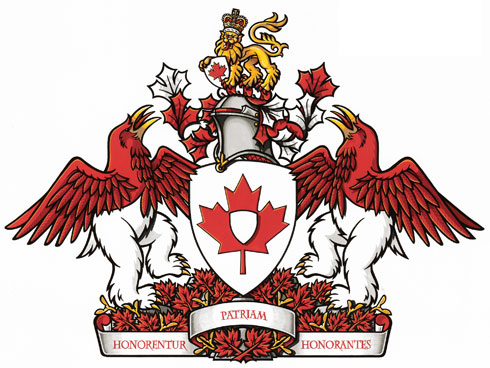 Arms : Argent on a maple leaf Gules an inescutcheon Argent
Crest : A lion passant guardant Or royally crowned Proper its dexter forepaw resting on an escutcheon Argent charged with a maple leaf Gules
Supporters : On a representation of an outcrop of the Canadian Shield proper strewn with maple leaves Gules and maple seeds Or two raven-bears Gules over Argent wings elevated Gules beaked and armed Or
Motto: HONORENTUR · PATRIAM · HONORANTES

The nature and work of the Authority itself are represented in the shield of arms, on which Canada’s red maple leaf bears a plain white shield as a sign of heraldry to be created and recorded for Canadians.

The crest is a variation of the Royal Crest of Canada, emblematic of the viceregal office. In this case, the crowned Royal Lion carries a white shield bearing a red maple leaf, symbolizing the exercise of the Sovereign’s heraldic prerogative by the Governor General.

The supporters are special heraldic beasts, half raven and half polar bear. Many First Nations in Canada regard the raven as a creator or transformer, while the polar bear is known for its strength and endurance. These supporters represent the responsibility of Canada's heralds to create symbols for a wide range of Canadian institutions and individuals. The supporters rest on an outcrop of the Canadian Shield, representing the solid foundations on which the Authority has been established.

The Latin motto can be translated as: "Let those who honour their country be honoured".