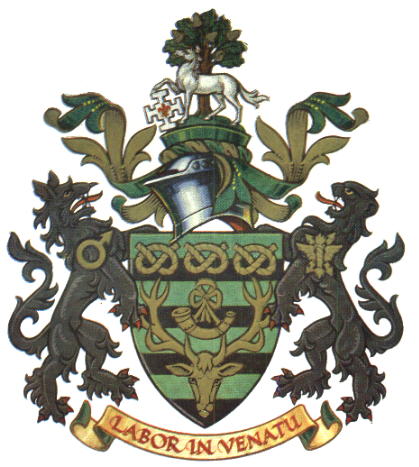 Arms : Barry of eight Vert and Sable a Stag's Head caboshed between the attires a Hunting Horn stringed in chief three Stafford Knots in fess Or.
Crest : On a Wreath Or and Vert out of a Circlet on a Mount Vert in front of an Oak Tree proper fructed Or a Horse passant resting the dexter forehoof on a Cross potent quadrate charged with a Fleur-de-Lys Gules.
Supporters : On the dexter side an Heraldic Tiger Sable charged on the shoulder with the Astronomical sign for Mars Or and on the sinister side a Lion Sable charged on the shoulder with a Thunderbolt Or.
Motto: 'LABOR IN VENATU' - Work in the Chase

The arms were officially granted on December 3, 1975.

The black bars indicate the layers of coal beneath the district. The stag's head and the horn are symbols for the name of the district. The three knots are a typical symbol for Staffordshire and represent the three communities of Cannock, Hednesford and Rugeley.

The crest shows an oak for the forests in the district, coming from a green ring which symbolises the Castle Ring. The horse symbolises the old horse fair in Rugeley. The cross symbolises the Bishops of Lichfield, who for a long time were Lords of the Manor of Cannock. The small fleur-de-lis on the cross is canting for Rugeley (rouge lys).

The supporters are a tiger on the right and a lion on the left side. The tiger is taken from the arms of the Paget family, whose ironworks supplemented the early coal industry. It bears the symbol of iron on its breast. The lion is taken from the arms of the National Coal Board and stands for the coal mining. It bears a thunderbolt referring to the modern electrical and electronic industries.

The motto is taken from Virgil and can be translated as "Work in the Chase".