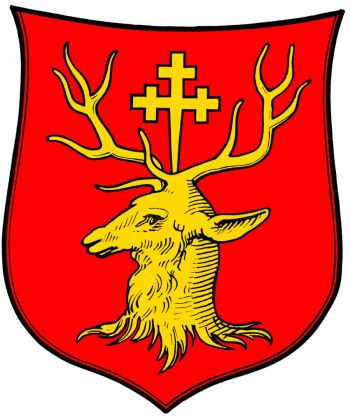 Gules, a stag's head erased, with a cross crosslet fitchy between his attires or.

King David I., in his charter of foundation of Holyrood, the date of which is stated in the Chronicle of Melrose to be 1128, granted to the canons the right of erecting this burgh. The burgh dates from the foundation charter of Holyrood, but the earliest notice of any municipal constitution is found in a charter of James IV., of January 5, 1493-94. The burgh became extinct by being absorbed into the city of Edinburgh by the Municipal Extension Act of 1856.

The arms are undoubtedly connected with a certain story about David I., the founder of Holyrood Abbey. It is found in a Holyrood Ritual, whose date may belong to the fourteenth century. It is to the effect that the King was hunting near the present site of Holyrood one Rood - Mass Day (September 14) when his horse took fright at a stag and ran away. The stag, however, followed, knocked over the horse, and gored the King in the thigh. While endeavouring to protect himself against the animal, he found a cross come into his hands from between its horns. This cross was afterwards carried before him by his chaplain, Alwin, when he was brought back to Edinburgh Castle; and in honour of his deliverance he founded Holyrood.

Whatever the ongm of this story, and without denying the possible fact of David's life having been in danger from a stag while hunting on September 14 near the site of Holyrood, or even that this incident may have led to the foundation of that establishment, there seems little doubt that the rood which he there placed was that which his mother had brought to Scotland, and which would seem to have remained in the Castle after her death.

The earlier seals of the burgh represent the legend in a very fully developed form. The stag with the cross between his horns is there represented standing in the forest in front of the church.