From Heraldry of the World
Your site history : Canterbury (New South Wales)
Jump to navigation Jump to search 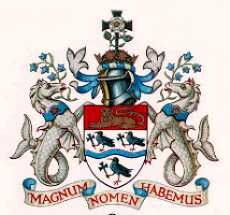 The shield identifies the situation of Canterbury and the source of its name, being based on the pattern of the ancient shield of Canterbury, Kent, England, which displays a golden lion on red above the three choughs (black crow-like birds with red beaks and legs), attributed as the arms of St. Thomas Becket, Archbishop of Canterbury 1162-1170. To the choughs is added a blue wave for Cook's River, and each holds a distinctive black cross from the arms of the Archbishop of Canterbury. On the red 'chief' at the top is the gold lion taken from the former Council seal.

The crest refers to the foundation and naming of Canterbury by the Reverend Richard Johnson from Yorkshire, appointed as the State's first chaplain in 1786. The mantling is in the colours of New South Wales state. A ring of gold stars from the state arms encloses a grassy mound representing Johnson's grant of Brickfield Hill in which is fixed the Canterbury cross to denote his foundation of the Church in the place named Canterbury Vale, an act which he clearly saw as a parallel to the pioneer work of St. Augustine at Canterbury, England, in 597 A.D. His Yorkshire origins are indicated by the White Rose of York, which appeared in the previous device.

The supporters are a marine version of the White Horse of Kent, England, of which the City of Canterbury is the capital, said to have been borne on the standards of the Danes who settled in Kent in the 5th century, and perpetuated in the arms of the Kent County Council. These 'sea-horses' denote coastal or river traffic, here identified by the blue wave from the shield denoting Cook's River, charged with the Polar Star from Cook's arms. In their mouths are sprays of the Canterbury Bell flower, a perfect heraldic reference to the name, taken from the former seal.

The motto, adapted from Cicero, means 'We bear a great name' in reference to Canterbury's illustrious 'ancestry'.