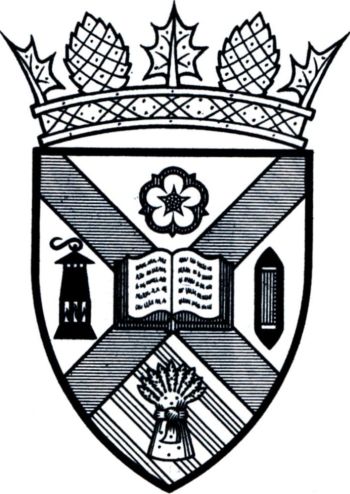 Per chevron Argent and bendy Vert and Argent, on a saltire Azure cantoned between in chief a strawberry flower Proper fimbriated Gules, in base a garb Or, in dexter flank a miner's lamp Sable enflamed Proper, and in sinister flank a shuttle paleways Sable garnished with thread Gules, an open book Argent, binding and fore-edges Gules.

The council is based in the Lanarkshire town of Carluke. Its arms are a heraldic interpretation of a device which appears in a stained-glass window in Carluke District Hall, and had become known locally as "the Parish Council crest".

The shield has as its main feature a blue saltire (for Scotland) and on it rests an open Bible. The strawberry flower represents the fruit-growing and preserve-making industries of the town, the miner's lamp and the shuttle its former close connections with coal-mining and weaving, and the golden garb on its silver and green field the agricultural interests of the area.