From Heraldry of the World
Your site history : Carmarthen
Jump to navigation Jump to search 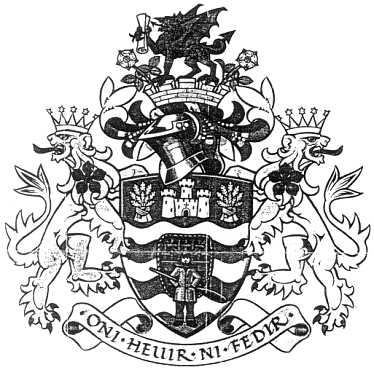 Arms : Barry wavy of six Argent and Azure a Fisherman affronty bearing on his back a Coracle with Oar proper on a Chief wavy Vert a Castle of three towers Argent between two Garbs Or.
Crest : On a Wreath Argent Vert and Sable upon a Mural Crown Or issuant therefrom two Roses Argent barbed seeded stalked and leaved proper a Dragon passant Gules holding aloft in the dexter forefoot a Roll of Parchment erect tied proper; Mantled parted Vert and Sable doubled Argent.
Supporters : On either side a Lion reguardant celestially crowned Or and charged on the mane with a Cinquefoil Sable.
Motto: 'ONI HEUIR NI FEDIR' - One must reap before one sows

The field consisting of six waves suggests the rivers and coastline of the District. The coracle fisherman was the crest of the former Borough of Carmarthen (now used by Carmarthen Town Council). A similar figure appeared on the medallion of Newcastle Emlyn RDC and on the front of the official guide to Carmarthen RDC, so it was an obvious choice as an emblem for the area. The chief bears a castle from the former Borough's arms, flanked by two garbs from the arms of Carmarthen RDC. The castle also represents other fortresses in the District such as Newcastle Emlyn, Laugharne and Llanstephan. The castle also represents the Borough and Urban District, and the garbs the two Rural Districts which were combined to form the new council's area. The chief is coloured green for agriculture and dairy farming.

The wreath and mantling are in three colours to suggest the limestone quarrying (white), agriculture (green) and coalmining (black). The gold mural crown was found in Carmarthen RDC's crest, and again suggests the many castles in the District. The red dragon of Wales is shown passant, like that in the crest of the Carmarthenshire County Council. The dragon upon the walled crown also recalls a legend that a dragon perched on the walls of Carmarthen Castle during its siege by Owain Glyndwr. The parchment recalls that Hywel Dda codified the laws of Wales at Whitland in the tenth century. The white roses are from the arms attributed to Dafydd ap Gwilym.

The supporters are gold lions reguardant from the arms ascribed to St. David. As difference they are charged with black cinquefoils from the arms of the See of St David's, and wear celestial crowns.

The motto was formerly used by Carmarthen RDC, and is appropriate for an agricultural community. 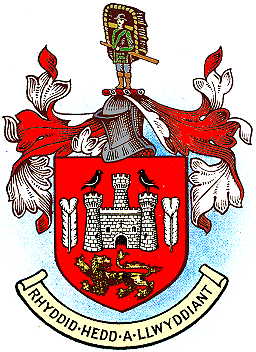 Arms : Gules a Castle triple-towered between two Ostrich Feathers erect in fesse Argent on each of the outer towers a Cornish Chough proper respecting the centre tower and in base a Lion passant reguardant Or.
Crest : On a Wreath of the Colours a Fisherman carrying a Coracle proper.
Motto: 'RHYDDID HEDD A LLWYDDINT' - Freedom, peace and prosperity

The arms were officially granted on April 9, 1936.

The arms were based on a seal in previous use. The feathers are from the insignia of the Princes of Wales, and the lion may have been derived from the arms ascribed to Cadell, Prince of South Wales in the last part of the ninth century.

The crest represents the salmon and sewing fishing industry, in connection with which the coracle is still in use.