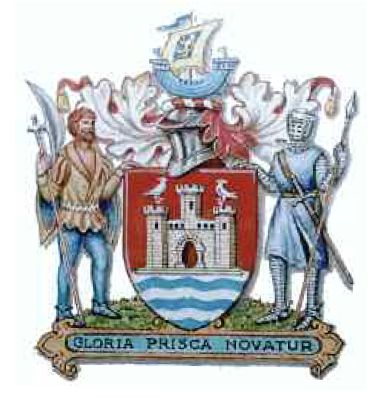 Arms: Gules, on water in base harry wavy a castle with three towers proper, in chief two doves respectant argent.
Crest: On a wreath of the colours, A lymphad flagged azure, the sail Or charged with a billet also azure thereon a lion rampant gold.
Supporters: On the dexter side an Irish Kerne (warrior) of the sixteenth century vested in a saffron tunic lined azure, with trews and brogues of the last, supporting with the exterior hand a halbert proper, and on the sinister side a knight in chain mail, his head enclosed in a war-helm proper, vested in a surcoat azure.
Motto: Gloria prisca novatur.

The arms are based on the old seals of the town. The seals showed the local castle/fortress above a sea and with two birds on the towers.

There is also a curious story on another seal used for centuries by the Mayor and council of the city up to 1793. This seal, shown below, showed an eagle and a curious text.

An eagle was never part of the city arms or in the arms of any known magistrate. The style of the seal indicated an origin in the 12th -14th centuries, so predating the main seal shown above. However, the text remained mysterious. In 1893 the mystery was solved (?)... The text was deciphered as S(igillum) FR(atr)IS BER(nardi) CAM(erarii) CIVITATIS AQ(vi)LE, meaning the 'Seal of Brother Bernard, Chamberlain of the City of Aquila'. The city of Aquila, in Northern Italy (!) indeed uses an eagle. But how and why did this seal came to be used as a Mayoral seal in Carrickfergus ?

The theory was that the seal came as a personal seal of Bernard, Archdeacon of Down (who held the office in the late 12th and early 13th century), although it is not known where he originates from. The time would fit with the design of the seal though. He may have used the seal to sign archdiaconal documents, and after his death it was maybe used as a seal of the Archdeaconry. And later by the town Mayor.

Literature: Vinycomb, J. : Notes on an Antique Seal of Carrickfergus. The Journal of the Royal Society of Antiquaries of Ireland XXIII(1893)69-72