From Heraldry of the World
Your site history : Castle Douglas
Jump to navigation Jump to search 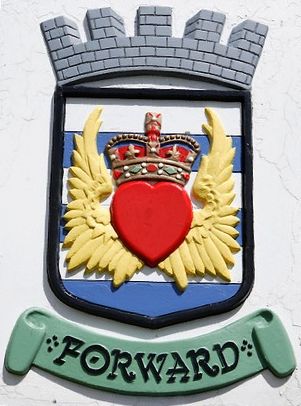 Barry of six Argent and Azure, a heart Gules ensigned with an imperial crown between two wings Or.

Above the Shield is placed a Burghal coronet and in an Escrol beneath the Shield this Motto "Forward".

The arms were officially granted on September 10, 1929.

Castle Douglas was created a Burgh of Barony in 1791 in favour of Sir William Douglas, a local man who had prospered in the West Indies and had purchased the estate of Gelston in Kirkcudbrightshire and built a castle there.

Based on the device on the seal adopted by the Burgh in 1892, the arms have the silver and blue colours of Galloway for a field; the crowned and winged heart and the motto were the crest and motto of Douglas, Marquess of Queensberry, with whom Sir William Douglas claimed kinship