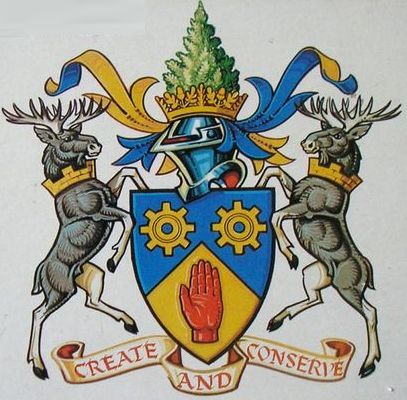 Arms : Per chevron Azure and Or in chief two Cogwheels of the last and in base a sinister Hand appaumée couped Gules.
Crest : Issuant from a Rural Crown Or a Leyland Cypress Tree (Cupressocyparis x leylandii) proper; Mantled Azure doubled Or.
Supporters : On either side an Irish Elk proper gorged with a Mural Crown Or.
Motto: Create and conserve

The arms were officially granted in 1977.

The red hand in the base of the shield is taken from the O'Neill arms and records the early history of Castlereagh. The Caisleán Riabhach or "grey castle" that gives its name to the area was built about 1350 by Aodh Flann O'Neill. The castle and land was abandoned by the O'Neills in 1618 and the castle no longer exists. The cogwheels in chief represent modern industrial development in the Borough.

The rural crown is from the arms of the Castlereagh RDC and the Leyland cypress, of the variety "Robinson Gold", was chosen to represent the Borough as the Forest Service of Northern Ireland states that it is unique to the area.

It also features in the centre of the medallion on the chain of the Mayor. The Irish elks, like that in the crest of the Castlereagh RDC, is common to the arms of County Down and Northern Ireland.