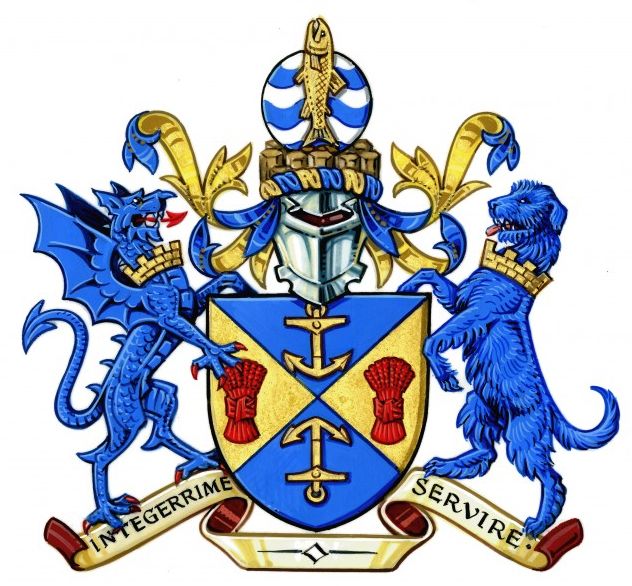 Arms : Per saltire Azure and Or an Anchor and an Anchor reversed in pale Or and two Garbs in fess Gules.
Crest : Upon a Helm with a Wreath Or and Azure Rocks of the Giant's Causeway issuing therefrom a Fountain proper surmounted by a Salmon haurient Or, Mantled Azure doubled Or.
Supporters : To the dexter a Dragon and to the sinister an Irish Wolfhound both Azure and gorged with a Mural Crown Or
Motto: INTEGERRIME SERVIRE – ‘Service with Integrity’.

Wheatsheaves represent agriculture, the harvest and prosperity, while anchors refer to the Borough’s ports and harbour and act as a symbol of hope and of security.

The design also references the World Heritage Site of the Giant’s Causeway and Altnahinch Dam while additional blue and white colours are a subtle celebration of Scottish connections.

The area's historic links to London are depicted through a dragon, which is balanced with the inclusion of an Irish Wolfhound.

The motto means Service with integrity