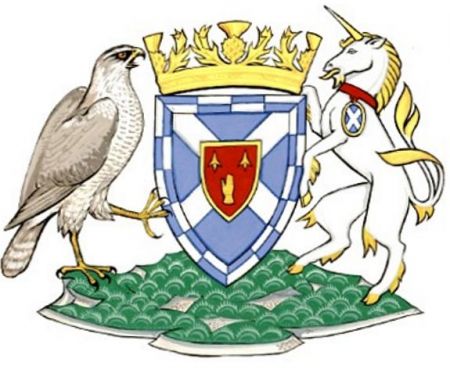 Azure, a saltire Argent, surmounted at the fess point by an inescutcheon Gules, fimbriated Or, and charged with two caltraps in chief and a dexter mailed gauntlet paleways in base all Or, a bordure coun­ter-compony of the First and Second.

Above the Shield is placed a coronet appropriate to a statutory Region, videlicet:- a circlet richly chased, from which are issuant four thistles leaved (one and two halves vis­ible) Or; and on a Compartment below the Shield are set for Supporters, dexter, a goshawk Proper, and sinister, a unicorn Argent, armed, maned and unguled Or, and gorged with a collar Gules, from which is pendant an oval badge Azure, fimbriated Or, charged with a saltire Argent.

The Council's arms follow the basic Regional design of a St Andrew's cross within a blue and silver bordure surmounted by a red inescutcheon with a gold fimbriation.

The inescutcheon is charged with a caltrap (or cheval trap) taken from the arms of Drummond, the main family of the part of Perthshire included in the Region, and from the arms of Stirling County Council, where it recalls the Scottish victory at Bannockburn in 1314; in base is a gauntlet or mannan in reference to the county of Clackmannan.

The dexter supporter is a goshawk recalling the falcon crest of the Drummonds, and the sinister supporter is the unicorn common to all the Regional Councils' coats of arms.