From Heraldry of the World
Your site history : Cham (kreis)
Jump to navigation Jump to search 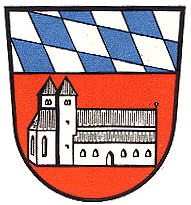 The upper part of the arms shows the arms of the Wittelsbach family (see the arms of Bayern), who ruled the area since 1205. Before 1205 the territory was owned by the Margraves of Cham-Vohburg. The lower part shows the church in Chammünster, one of the main historical buildings in the county. It represents the coming Christianity in the early Middle Ages. The church in the arms is shown in the architecture of the later part of the 13th century. The colours of the lower part are taken from the (victual) arms of the Margraves of Cham.