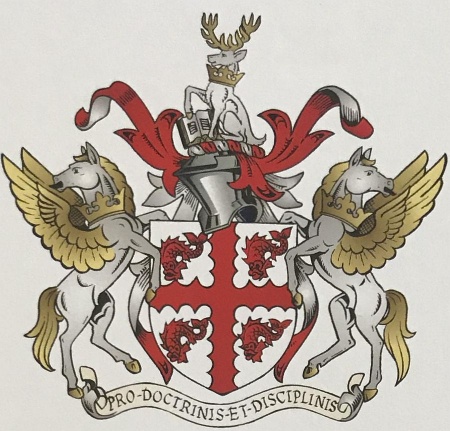 The arms were officially granted on ? to the College of Preceptors.

At some time during the 19th century the College of Preceptors adopted for use on its seal something which looked very like a coat-of-arms. The shield (Argent on a Cross Purpure a Book expanded Proper bound Or) is supported by a pair of Muses Proper in the original version which also incorporates an Annulet Or enfiling the open book and four curious lozenge-shaped objects, one in each quarter. The whole is surmounted by a representation of Queen Victoria's favourite light-weight crown which she preferred to use on most state occasions. Although a marvellous example of rather heavy Art Nouveau, the "arms" were unlawful and had to be replaced

The cross, slightly altered, comes from the original device and the dolphins remind us of the College's foundation in Brighton in 1847. The white stag with gold horns and hooves represents Theydon Bois and Epping Forest where the headquarters of the College are located and the open book is for scholarship. The Ancient Crown is a reference to the College's royal charter granted by Queen Victoria in 1849.

The winged horses represent the College's involvement in international education.