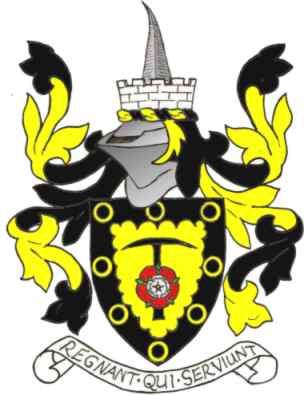 Arms : Or a Miner's Pick Sable surmounted of a Tudor Rose barbed and seeded proper on a Bordeure engrailed also Sable eight Annulets Gold.
Crest : On a Wreath Or and Vert out of a Mural Crown Argent masoned Sable a representation of the crooked spire of Chesterfield Parish Church proper.
Motto: 'REGNANT QUI SERVIUNT'- They rule who serve

The arms were officially granted on September 20, 1954 and continued by the new council of North-East Derbyshire.

The gold field and Tudor rose are derived from the arms of Derbyshire County Council. To these have been added a pickaxe for coalmining. The black engrailed bordure suggests a chipped coal face, and it is charged with gold rings suggestive of the mineral wealth of the district. The crest has a distinctively coloured mural crown from which rises the famous twisted spire of Chesterfield Church.