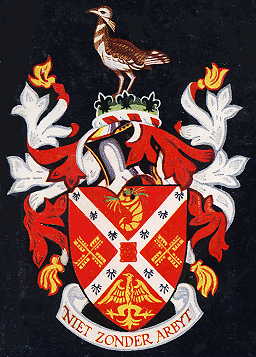 The red background is like those of the arms of the City and University of Cambridge, linking the original situation of the name-parish of Chesterton and the location of its administrative offices within the City and the association of many parishes with the University. The saltire represents the crossing of the ancient highways of Akeman Street and Via Devana in the middle of the Distrct; ermine representing Ermine Street as well as a reminder of the ermine cross in the arms of the University. The book not only symbolises this connection with the University, but also the literary association of the District with Chaucer, Tennyson, Rupert Brooke, Pepys, Boyce and Byron. It also refers to the situation of the famous Girton College and the Impington Village College. The cornucopia reprsents the orchards, nurseries and preserving industries of the northern parishes. The sails of a windmill suggests the agricultural areas and notably the oldest post-mill in the country at Bourn and the restored windmill at Madingley. The goldern Roman eagle represents the Roman antiquities in the southern part of the District.

The main colours of the wreath reflect those of the shield, which are also those of the de Freville family. The three fleurs-de-lys are from the arms of one of the principal families, Pepys of Cottenham and Impington. The bustard is from the supporters of the County arms and an emblem of the fenlands and rivers of the District.

The motto is that inscribed on a house in Fen Drayton associated with Vermuyden, the famous fen drainer: "Niet Zonder Arbyt"-"Nothing without effort/work" - the only Dutch motto in British civic heraldry.