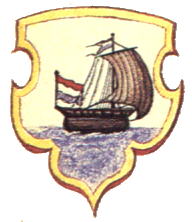 The arms show a single Dutch merchant ships. The meaning thereof I do not know.

The above image dates from a manuscript dating from 1717/1720. The town currently does not use arms.