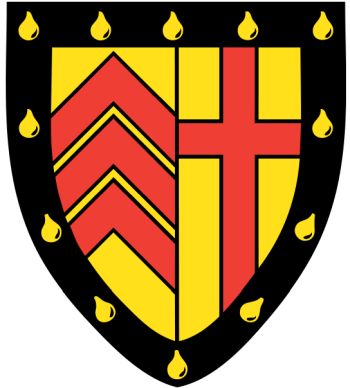 Or, three chevronels gules, impaling Or, a cross gules; all within a bordure sable guttee d'Or.

The arms were officially recorded in 1684.

Clare College, founded in 1326 as University Hall and re-founded in 1338 by Elizabeth, sister and co-heir of Gilbert, Earl of Clare, and widow of John de Burgh uses the three chevrons gules for Clare, the a cross gules for De Burgh, all within a bordure sable charged with golden drops.

The lady's arms are to the dexter, she having been of the greater estate. In this case the bordure, which differences the college arms from the impaled coats of wife and husband, dates from the foundress's lifetime, having been added as a sign of mourning in her widowhood.