From Heraldry of the World
Your site history : Clevedon
Jump to navigation Jump to search 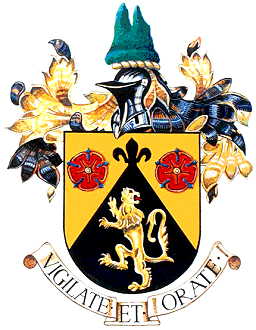 Arms : Or on a Pile reversed flory at the point Sable between in chief two Roses Gules barbed and seeded proper a Lion rampant reguardant of the field.
Crest : On a Wreath of the Colours issuant from a Mount Vert a Hill cleft at the summit proper.
Motto: 'VIGILATE ET ORATE' - Watch and pray.