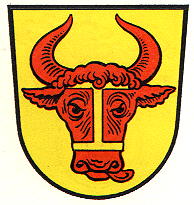 The bull's head in the arms is canting (from Kuh, compare Dutch Koe, both meaning cow), but bears no ethymological relation to the name of the town. The head already appears in a seal of the city from 1291. Older seals show the patron saint, St. Lambert between two towers. Since 1392 the head is used as the main symbol on the seals and arms. From 1578-1763 the city struck its own coins, also with the head.