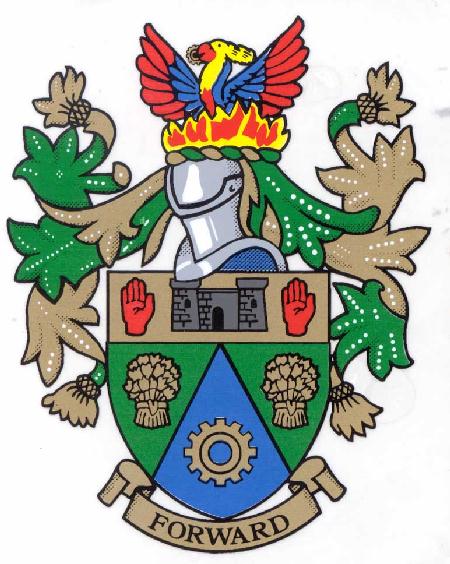 Arms : Per chevron vert and azure, ini chief two garbs proper and in base a cogwheel, and on a chief Or a port between two towers proper between two dexter hands couped gules.
Crest : A phoenix rising from flames proper, in the back a cogwheel gules.

The arms were officially granted on August 6, 1969 to the old Cookstown UDC and continued by the new council.

The shield comprises a cogwheel in a blue base symbolising industry (and in particular the old linen industry centred along the Ballinderry River), sheaves of grain on a green background symbolising agriculture, and a castle symbolising Killymoon Castle built by James Stewart in 1671. The colours chosen represent the agriculture significance of the District and the blue represents that vast inland sea to the east of the District, Lough Neagh.

The crest comprises a Phoenix rising from a bed of flames symbolising the rebuilding of the present town in the mid-18th century from the ashes of the Old Town which was almost completely destroyed by fire in the recapture of the Lissan ironworks where the rebels had forged many of their weapons. The crest also includes The Red Hand of Ulster, symbolising the Earldom of the O'Neills who were crowned Kings of Ulster at Tullyhogue Fort up until the late 15th century.