From Heraldry of the World
Your site history : Corby
Jump to navigation Jump to search 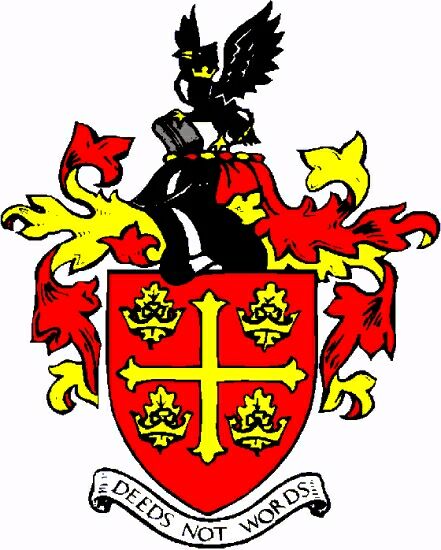 Arms : Gules a Cross patonce cantoning four Oak Leaves each enfiled by a Ducal Coronet Or.
Crest : On a Wreath of the Colours a Corbie wings elevated Sable beaked membered gorged with a Ducal Coronet and chained Or its dexter claw resting on a Gad of Steel proper.
Motto: Deeds not words

The arms were officially granted on March 3, 1958.

The gold cross patonce on a red field is from the arms of the Latymer family. It is placed between four oak leaves encircled by ducal coronets, representing Rockingham Forest.

The gold and red livery suggests the Royal connections of Rockingham Forest. The crest is a "Corbei" or Raven. This is a pun or rebus on the town's name. For heraldic difference, the raven wears a coronet and chain. The raven supports a steel ingot, the steel industry leading to the foundation of the modern town.