From Heraldry of the World
Your site history : Corinthian Casuals Football Club
Jump to navigation Jump to search 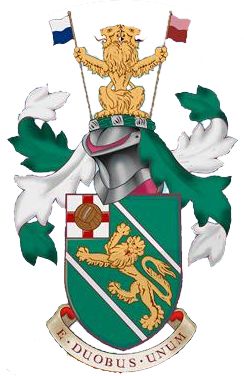 Arms : Vert, a lion passant guardant in bend Or between two cotises argent; on a canton of the last a cross of St. George surmounted of a football proper.
Crest: On a wreath argent and vert, a two-headed lion sejant affrontee, the heads turned to the dexter and the sinister Or, supporting with the dexter forepaw a staff, flying therefrom a banner per fesse of white and blue silk, and with the sinister forepaw a like staff, flying therefrom a banner per fesse of pink and dark brown silk, all proper.
Motto: E duobus unum

The arms were officially granted on December 10, 1958.

If you have any information on these arms Casuals Football Club mail us !