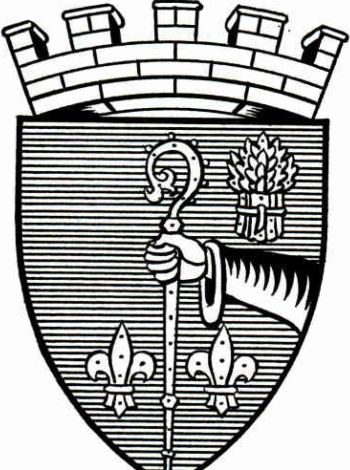 Azure, a dexter arm Proper, clad in a manche Argent, issuant from the sinister and grasping a pastoral staff in pale, between a garb in sinister chief and two fleurs-de-lys in base all Or.

(Above the Shield is placed a Burghal coronet)

Coupar Angus was created a Burgh of Barony in favour of James Elphin­stone, Lord Coupar, in 1607.

The arms repeat the device on the Burgh seal. This consists of a representation of the seal of Andrew de Buchan, in 1292 Abbot of the Cistercian Abbey of St. Mary at Coupar Angus (founded by King Malcolm IV in 1164), with the addition of a garb to denote the well-known agricultural interests of Strathmore, of which the Burgh is the centre.

Appropriately, three garbs appear in the arms of the ancient Earldom of Buchan, whose blue and gold livery colours have been used.

The arms are now used by the Coupar Angus, Ardler and Bendochy Community Council.