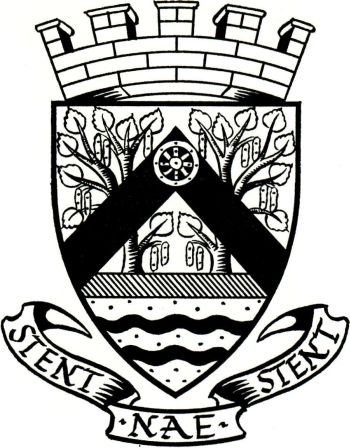 Per fess Argent and Or: a bar dehanced Vert, in chief two birch trees issuant from the bar Proper, fructed of the Second, and in base two barrulets wavy Sable; over all a chevron of the Last charged with a wheel of the Second.

Below the Shield which is ensigned with a coronet appropriate to a Burgh is placed in an Escrol this Motto "Stent Nae Stent".

Cowdenbeath developed around the extensive coalfields of the area and became a Police Burgh in 1890.

The arms are partly a conventionalising of the device on the seal adopted by the Burgh in 1892 which showed a pit-head scene.

The silver field and black chevron recall that this was once country owned by the Balfour family, but with its golden wheel the chevron also symbolises the pit-head hoist just as the black barrulets denote the coal underground. It is also intended to indicate that the days of feudalism are long past and that coal-mining was the major interest of the town at the time.

The birch trees are for Beath (the name of the parish) which is a Gaelic word meaning "birch tree".

The Scots motto which means "Effort always effort" or "Don't stint, always give of your best", is of special interest as the word "stent" refers to the amount of work allocated to a miner during a shift and has the same meaning as the English word "stint".