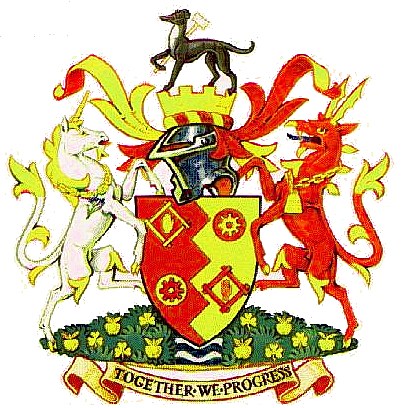 The shield is divided per pale indented to show the union of two boroughs.

The red hand of Ulster is shown within a lozenge formed of interwoven strands to represent weaving. The roundels suggest coins for commerce and are charged with cogwheels for industry. All the charges are countercharged. The red and gold colouring is to suggest blood and sweat or the rewards of work.

The crest has a mural crown symbol of municipal government. On this stands a greyhound. This represents the racing dog Master McGrath who won the Waterloo Cup and inspired a song. He supports a wheeltapper, to represent the railway junction at Portadown. The supporters are a unicorn and heraldic antelope from the arms of the Dukes of Manchester. For heraldic difference they wear chains from which hang a flax flower for the traditional linen industry and the historic Seagoe Bell respectively.

The compartment is broken by barry wavy water for the River Bann and Craigavon Lake, while the grass represents the rural areas of Craigavon. The grass is semée of golden apples and shamrocks. The apples are grown locally, while the shamrocks remind us that the district is in Ireland.

The motto is TOGETHER WE PROGRESS.