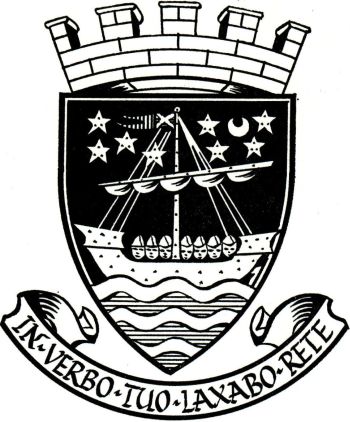 Sable, on the waves of the sea in base undy Argent and Azure, a ship with one mast Or, sail furled, pennoned of Scotland, and manned by seven mariners full-faced Proper; in the dexter chief four stars of the Fourth, and in the sinister as many like stars, accom­ panied by a crescent of the Second.

Above the Shield is placed a mural coronet and in an Escrol under the Shield this Motto "In Verbo Tuo Laxabo Rete".

Crail appears about 1170 as a Burgh of Ada, Countess of Northumberland, mother of King William the Lion and King Malcolm IV. On her death in 1178, it fell to the Crown and became a Royal Burgh.

The arms show a night fishing scene. The seal on which they are based is very old; there is an impression almost exactly the same attached to the 1357 document relating to the Ransom of King David II, Crail being one of the Burghs which attested that Document.

An old sealing instrument, of pre-1550 date, which bore an identical sealing device, was found in 1902 during the demolition of a house in Castle Street in Crail.

The Latin motto means "At Thy Word I will let down the net". 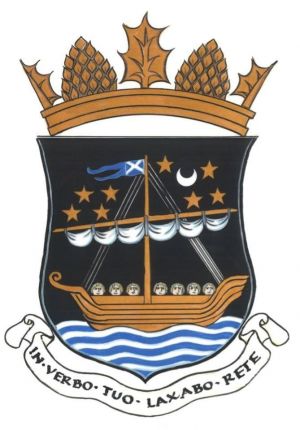