From Heraldry of the World
Your site history : Croydon
Jump to navigation Jump to search 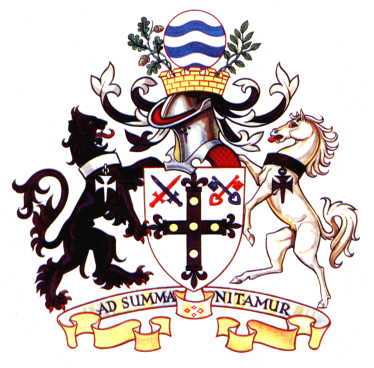 Arms: Argent on a Cross flory at the ends Sable five Bezants between in chief to the dexter two Swords Azure and Gules in saltire and to the sinister two Keys Azure and Gules in saltire.
Crest: Out of a Mural Crown Or a Fountain between a Branch of Oak leaved and fructed and one of Beech slipped proper.
Supporters: On the dexter side a Lion sableand on the sinister side a Horse Argent each with a Cross formy fitchy pendent from a Collar counter-changed.
Motto: 'AD SUMMA NITAMUR' - Let us strive for perfection.

The shield is white bearing a black cross with its arms terminating in fleur-de-lis shapes, and surmounted by five gold discs. These elements are all taken from the personal arms of Archbishop John Whitgift. At the top of the shield are a red and blue pair of crossed swords, and a red and blue pair of crossed keys. A sword is the emblem of St Paul; and two keys are the emblem of St Peter: these elements are taken from the arms of Chertsey Abbey, which owned the manor of Coulsdon in the middle ages.

The Motto means 'Let us strive after perfection' 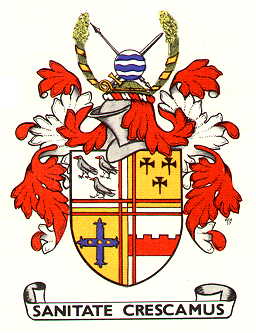 Arms: Quarterly Argent and Or a Cross parted and fretted Gules between three Cornish Choughs proper in the first quarter as many Crosses patee fitchée Sable in the second a Cross flory Azure charged with three Besants fessewise in the third and a Fesse embattled of the third in the fourth.
Crest: On a Wreath of the Colours upon a Mount Vert a Crosier fessewise Or thereon a Fountain in front of a Tilting Spear in bend surmounting a Sword in bend sinister the whole between two Tufts of Rye-grass proper banded Gold
Motto: 'SANITATE CRESCAMUS' - May We Grow in Health.

The three Cornish choughs or "beckits", in the first quarter, from the arms of St. Thomas Becket, Archbishop of Canterbury, are a reminder of Croydon's long association, through the Manor of Croydon, with the Archbishops of Canterbury.

The three crosses patee fitchée, in the second quarter, are another allusion to Canterbury and derive from the four similar crosses of the arms of the See. The blue cross charged with three bezants, in the third quarter, is a reminder of Archbishop Whitgift, whose benefactions to Croydon include the two famous schools which bear his name. The embattled fess, in the fourth quarter, is a heraldic representation of a town wall which is appropriate to the arms of a municipality. The cross parted and fretted is to make it plain that the four quarters into which the shield is divided do not indicate, as heraldic quarterings normally do, the descent of the bearer from several families.

The mound and heraldic fountain represent a stream of water issuing from a green hill. This stands for the Croydon Bourne, and the gold-bound tufts of rye-grass are said to allude to the rye-grass of the irrigation meadows of Beddington Farm. The gold crozier, an archbishop's great staff, is another reminder of the association of Croydon with Canterbury. The sword and tilting spear recall the Royal Military College of the Honourable East India Company, which stood at Addiscombe from 1809 until 1850.