From Heraldry of the World
Your site history : Cruiser USS San Jacinto
Jump to navigation Jump to search 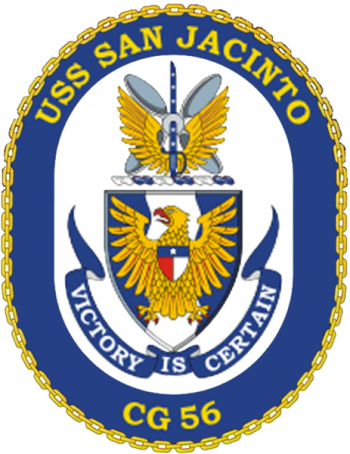 The wavy pile symbolise the San Jacinto River, the Battle of which in 1836 won Texan Independence. The Shield on the Eagle alludes to the Flag of Texas. The Eagle symbolise Mexico and the United States, and represent Texas history and the victory at San Jacinto. The propeller symbolises the first San Jacinto which was one of the first US Navy screw type warships. The Wings represent the second USS San Jacinto (CVL-30) a light Aircraft Carrier. The five stars on the Sword symbolise the five Battle Stars earned by CVL-30 during World War II. The Sword also connects the present San Jacinto with its state-of-art technology, to previous ships of the Name.