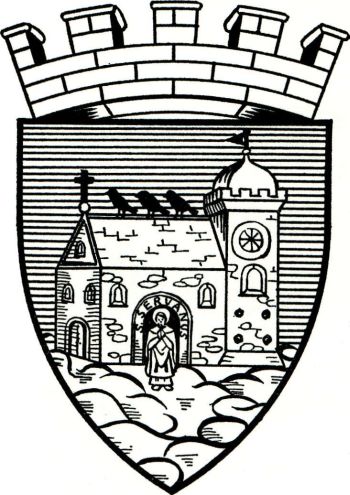 Azure, on a mount, a representation of the Abbey of Culross Proper, in front thereof the figure of Saint Servanus, vested Argent, his hands raised in prayer Proper.

Above the Shield is placed a mural coronet.

Culross was created a Burgh of Barony for the Abbot of Culross in 1490 and was made a Royal Burgh by King James VI in 1592.

The arms are based on the device on the Burgh seal and show St. Servanus or Serf standing in prayer in front of the Abbey of Culross founded by Malcolm, Earl of Fife, in 1217. St. Serf is said to have sheltered Thenew, Princess of Lothian and mother of St. Kentigern or Mungo, at Culross, and to have baptised and educated St. Kentigern there, before the latter went on to the West to become the great missionary to the Clyde Valley and the founder of Glasgow Cathedral.

The blue and silver colours probably recall that Culross Abbey was dedicated to the Virgin Mary and St. Andrew as well as to St. Serf. The three birds on the roof are traditionally associated with the Abbey and St. Serf, and this appears to be the reason why they are not specifically mentioned in the blazon.