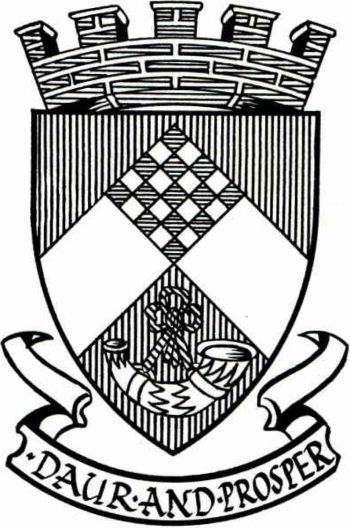 Gules, upon a chevron Argent a lozenge chequy of twenty-five panes Azure and of the Second, and in base a hunting-horn also of the Second, stringed Vert.

Above the Shield is placed a coronet proper to a Police Burgh, viz. Azure masoned Argent, and in an Escrol below the same this Motto "Daur and Prosper".

The arms show the silver chevron on a red field of the famous family of Fleming, Earls of Wigtown and Lords of Cumbernauld; in base is the hunting-horn of the Burns family of Kilmahew, one of whose seats was Cumbernauld House.

The blue and silver chequered lozenge on the chevron recalls the weaving industry, which was prominent in the district in the early nineteenth century and also depicts the pedestrian underpasses which are a feature of the new town; the line of blue squares rising from the base of the chevron represents its situation on the watersheds of the rivers Forth and Clyde.

The Scots motto was chosen as "symbolic of the attitude of the Town Council and of the concept of the new town".