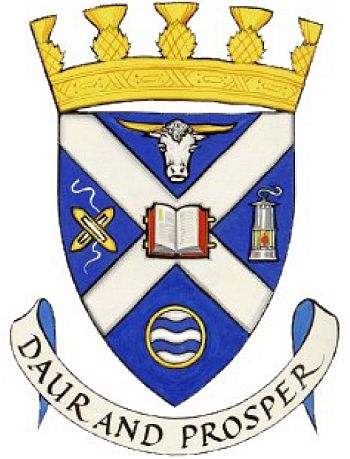 Azure, on a salt ire Argent cantoned between in chief a bull 's head cabossed Argent armed Or, in base a plate fimbriated Or and charged with two barrulets wavy Azure, in the dexter flank two shuttles in saltire Or, garnished with thread Argent, and in sinister flank a miner's lamp Argent, enflamed Proper, an open Bible Proper, binding and fore-edges Gules.

Above the Shield is placed a coronet appropriate to a statutory District, videlicet:- a circlet richly chased, from which are issuant eight thistle-heads (three and two halves visible) Or; and in an Escrol under the Shield this Motto "Daur and Prosper".

The arms show the St. Andrew's Cross of Scotland, with several small charges. The bull's head symbolises the famous Cumbernauld white cattle, the shuttle and miner's lamp come from the arms of Kilsyth burgh. The base shows a small plate with two wavy bars, symbolising the Forth and Clyde rivers. The open bible also is taken from the arms of Kilsyth.

The motto "Daur and Prosper" is taken from the arms of Cumbernauld.